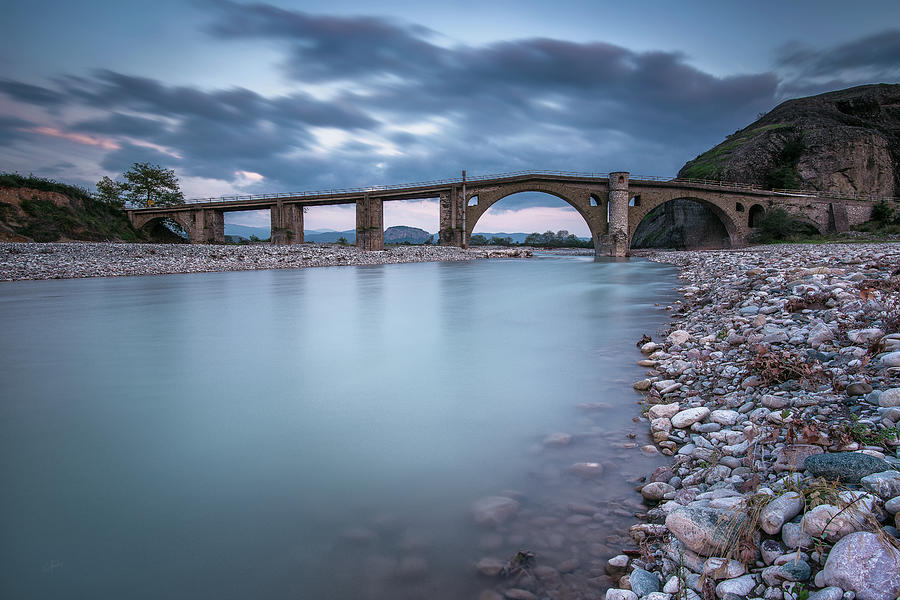 Note: The Fine Art America watermark where is present will not appear on the final print.

Sarakina bridge is a 6 stone arched bridge over the Peneus river that was originally constructed in 1520 under the guidance of bishop Bessarion of Larissa. There's also an inscription built in the wall that refers the year of 1514 as the construction year.

Nowadays part of it is comprised of sandstones and some other part from concrete. The reason for this is that at the beginning of the 19th century, two arches and a pier of the bridge collapsed due to the erosion of part of its foundations. At first, the collapsed parts were replaced by wooden add-ons but much later in 1970 they were also replaced in turn and reinforced by concrete construction. The deck was also reinforced by concrete plates and extended to two meters wide. The maximum height of the bridge is 9,7 meters and the maximum width of its largest central arch is 19,7 meters.

In 2005 the bridge got totally useless as a new one has been built to cover the transportation needs between the villages.

Thanks a lot, Judy!

This is beautiful, Elias! And, I love the subtle blue and earth tones! So many beautiful photographs! l/f/p

This is fantastic! Beautiful colors!

Thanks a lot, Hans!

Stunning!!!! I love the soft colors, different textures and lines.

Thank you so much, Andrea!

this is a most beautiful picture. l/F

Thanks a lot, Constance!